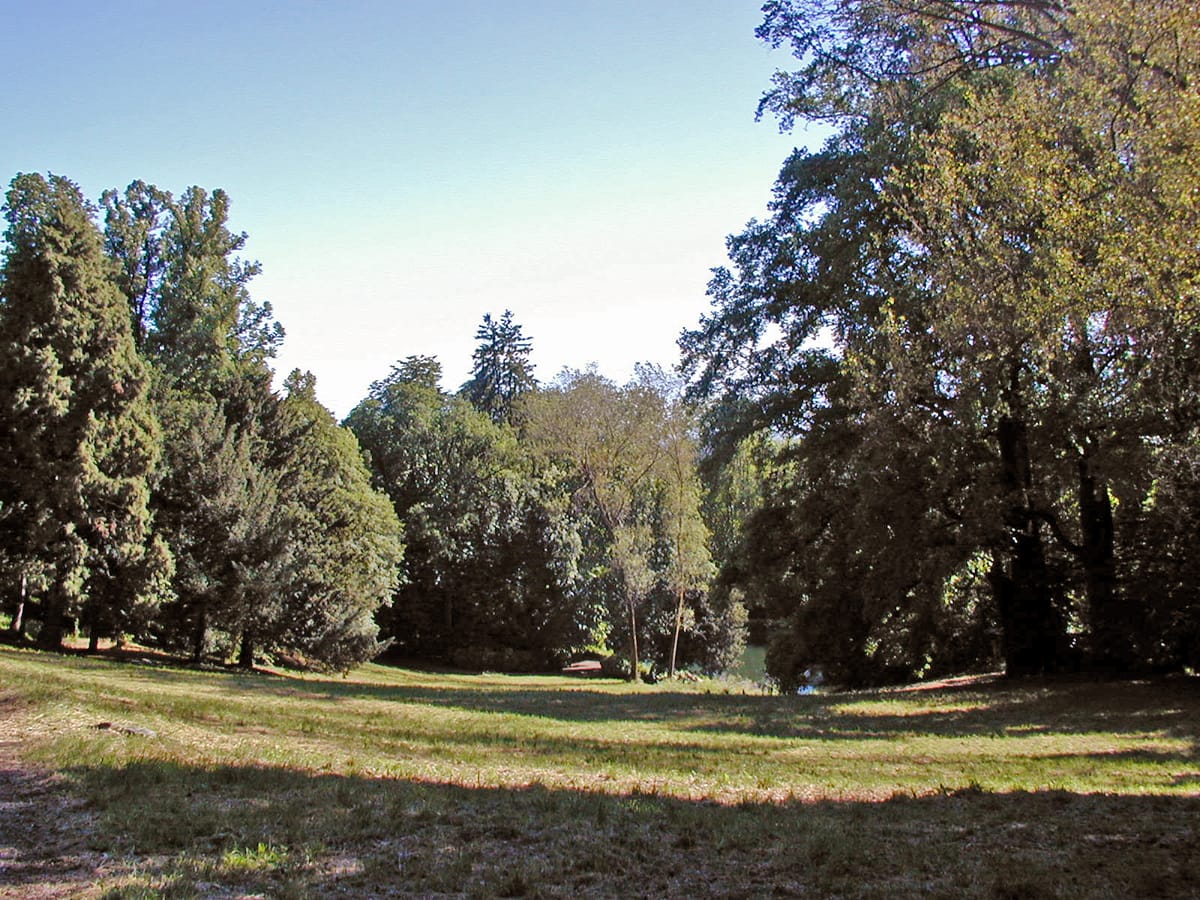 The park of Villa Besana is spread over eight hectares across different levels of land: it is entirely crossed by a driveway that from the main entrance of the Villa, located in an elevated position with respect to the park, descends with sinuous curves to the lowest part, where the lake is found.

The park structure has not changed substantially since the garden was designed in the 19th century. It is therefore still possible to capture the original design in all its completeness and complexity and perceive the different landscape elements that make up the park.

Above, the main entrance, from via Giovanni Besana, is flanked by a row of cypresses. Below, beyond the lake, a gate that gives access to via Teresa Prevosti could have been the entrance that allowed you to walk through the park in the opposite direction and from below go up along the avenue and reach the Villa.

In fact, along the entire extension of the avenue, and in both directions, there are views and perspective axes, which demonstrate a careful planning of the park, according to the criteria of the mid-nineteenth century, when the different levels of the land were exploited to create panoramas and views with a strong landscape character, with a prevalent use of the arboreal element was used to frame the views. This was complemented by realizations marked by a greater compositional simplicity, but richer in ornamental vegetation typical of the end of the century.

The park is basically divided along two perspective axes that exploit the two orientations due to the unevenness of the ground: the main one develops centrally from the main front of the building, in a South-South / East direction and guides the sight towards the plain below at the bottom of the which one sees Milan on clear days. This axis is framed in two arboreal wings composed almost exclusively of conifers and ideally passes through the center of a group of Abies alba planted in a circle, of which the apex of the foliage can be seen from above. Along this axis is the true perspective telescope, whose focus, Milan, however, does not coincide with the vanishing point of the perspective. In fact, the depth of the telescope is fully appreciated when, walking along the avenue, you leave the flat part on the front of the villa and, after a curve that reverses the direction of travel, beyond a short shady stretch, the panorama of the plain below.

The second axis is not rigidly defined as the first and develops on the western side of the villa, towards the lake, located at the bottom of a small valley. This second axis coincides with the main view that can be enjoyed from above towards the mirror of the lake and at the same time is reflected in the reverse view that can be enjoyed from the lake, upwards, on top of which the silhouette of two beech trees stands out. they come together in a single crown. In the green backdrop composed of the tree screen to the east, which runs along the border, two emergencies stand out: the shrine of Sant’Elena with a semi-circle of cypresses in the background, and the circle of Liriodendron tulipifera.

The two main curves of the avenue, which each time reverse the direction of travel, both rotate around a center: the upper one around the two beech trees and the other around the circle of fir trees.

There are also secondary perspective axes such as the one that runs from the aedicule of Sant’Elena, crosses the Labyrinth, a downhill path that draws a very narrow serpentine bordered by high box hedges, and reaches a fir tree, passing transversely through the origin of the perspective telescope. Other times, along the avenue you will encounter views such as the one that, proceeding from below, once you pass the circle of fir trees, opens onto the villa.

These sequences of views are combined from time to time with openings in the tree screen, twists in the path, abrupt passages from shaded areas to light areas, all still perceptible despite some incongruous plantings that have occurred over the last few years and numerous losses due to storms and storms.

To the east of the parterre there is a grove of lime trees, composed of monumental specimens of Tilia vulgaris, furrowed by curvilinear paths, with an undergrowth that mainly presents yews and hollies.

From the lime wood, heading south / south-east, the hornbeam tunnel, or Carpinata, starts, which proceeds straight towards the Casino del Roccolo beyond which the Roccolo di carpini circle takes place. Parallel to the Carpinata, further down, runs the Viale delle Palme.

Among the different groups of trees introduced after the war, inserted without taking into account either the vegetational composition or the original design, the birch plantation, Betula pendula, next to the Labyrinth, which has radically changed the perception one of the latter, especially in the changing seasons; another group of black poplars, Populus nigra, along the tree screen north of the Liriodendron, in conditions of strong instability due to the unsuitable substrate; and finally a row of willows, Salix x cuprea, on one side of the perspective towards the lake.

Path around the lake